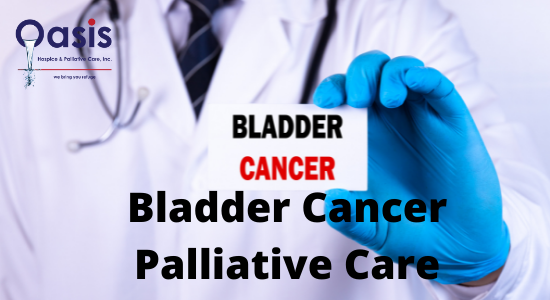 Palliative care services have tended to be needed because of substantial physical complaints in persons with terminal bladder cancer. The increasing use of cross-sectional imaging is discovering incurable diseases much earlier when there are typically no physical symptoms. However, the psychological and spiritual impact of a terminal diagnosis will always be substantial and assistance from professional palliative care at this earlier stage may be of tremendous benefit. This article deals with the use of chemotherapy for persons with distant metastases and with specific symptoms from locally advanced or metastatic bladder cancer. 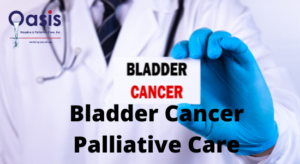 Managing Individuals Who Have Distant Metastases

The majority of people who die of bladder cancer do so as a result of metastatic illness. Chemotherapy is the primary treatment used to prolong life and palliate/alleviate symptoms. The majority of chemotherapy studies demonstrate benefits in terms of response, symptom control, and survival, but at the expense of severe treatment-related toxicity. Not all patients are eligible for chemotherapy, for example, due to debility, reduced renal function, or being too old to take it safely, and some prefer not to undergo it. Although there are anecdotal stories of long-term survivors, these are uncommon. Chemotherapy’s role in patients who progress or relapse after receiving first-line treatment is less obvious, as their prognosis is typically estimated in months, and so the benefits and cons of chemotherapy are extremely precisely balanced.

Pelvic radiation can also be used to treat patients who have symptoms consistent with incurable bladder cancer, most notably bladder hemorrhage or pain, or locations of metastatic dissemination. Other types of specialized intervention may be explored in the event of serious bladder problems (such as discomfort, bleeding, or upper urinary tract obstruction), including the following:

Bladder cancer is frequently detected early because it results in blood in the urine or other urinary symptoms that prompt a person to seek medical attention. What is bladder cancer palliative care?

In the majority of instances, the initial sign of bladder cancer is blood in the urine (called hematuria). There may be enough blood in the urine to change its color to orange, pink, or, less frequently, dark red. Occasionally, the color of the urine is normal but trace amounts of blood are detected during a urine test (urinalysis) ordered in response to other symptoms or as part of a routine medical examination.

Blood may appear one day and disappear the next, while the urine remains clear for weeks or even months. However, if a person has bladder cancer, the blood will resurface at some point. Typically, bladder cancer in its early stages (when it is tiny and limited to the bladder) causes bleeding but little or no discomfort or other symptoms. You should always look for hospice care cancer near me for bladder cancer patients.

Urine that contains blood is not usually indicative of bladder cancer. Often, it is caused by something else, such as an infection, benign (noncancerous) tumors, kidney or bladder stones, or other benign kidney illnesses. However, it is critical to have it evaluated by a physician to ascertain the cause.

Bladder cancer can occasionally result in alterations in urine, including the following:

These symptoms are more frequently caused by a urinary tract infection (UTI), bladder stones, an enlarged prostate, or an overactive bladder (in men). Nonetheless, it is critical to have them evaluated by a physician so that the underlying cause can be identified and treated, if necessary.

Bladder malignancies that have increased in size or migrated to other parts of the body may occasionally present with additional symptoms, including the following:

Again, many of these symptoms are more likely to be caused by anything other than bladder cancer, but they should be evaluated. If your doctor has cause to suspect you may have bladder cancer, he or she will do one or more exams or tests to determine whether the problem is cancer or something else.