Hospice No Food Or Water

Hospice care is a distinct type of care that aims to improve the quality of life of patients and caregivers in the final stages of a life-limiting disease. It offers compassionate care to people suffering from incurable diseases, focusing on the mind, body, and spirit. 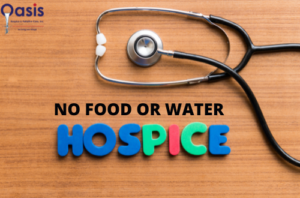 The human body requires large amounts of water and can only survive for a few days without it. Numerous other factors, such as an individual’s activity level and environment, are also important. As a result, there is no way to predict how quickly someone will die from dehydration. What if there is service of hospice, no food or water?

Dehydration happens quickly, causing extreme thirst, fatigue, organ failure and death. Without water, a person may progress from thirst and slightly lethargic on the first day to organ failure on the third day.

Different people react differently to dehydration. Each person has a different tolerance for dehydration and may go without water for longer or shorter periods than another.

How Long Can a Normal Person Survive Without Water

The body requires a lot of water to maintain an internal temperature balance and keep cells alive. In general, a person can survive for about three days without water. Certain factors, such as the amount of water required by an individual body and how it uses it, can, however, impact this.

How Does A Patient Become Hospice Eligible

In addition, patients must meet the admission requirements of the Medicare and Medicaid Services to receive hospice care. Private insurance, Medicare, and Medicaid require two doctors to agree that a patient’s survival beyond six months is unlikely. Although doctors can use several indicators to estimate a six-month life expectancy, this is not an exact science, and some patients will live longer.

What Are the Signs of Death From Dehydration

Before death, those who die of terminal dehydration typically experience delirium and altered serum sodium levels. Although a sensation of mouth dryness is frequently described as “thirst,” the cessation of hydration does not produce true thirst. One might also wonder how long a hospice patient can survive without water. Death is frequently imminent when medical professionals decide to withdraw water (and would be very close whether or not hydration was kept up). Most of the time, this means a few hours or, at most, a few days.

When a person stops taking fluids and becomes bedridden (requiring little fluid), they may live for a few days or up to weeks. During the normal dying process, people lose their sense of hunger and thirst. According to the National Institute for Health Care Excellence (NICE), someone who is “two to three days” from death should have their hydration monitored daily to determine if they need fluids via a drip – with the risks of assisted hydration and drinking water explained.

How Long Can an Average Person Survive Without Water

According to one study, you cannot survive for more than 8 to 21 days without food and water. Individuals on their deathbeds who use little energy may only last a few days or weeks without food or water. Water is far more important to the human body than food.

How Long Do People Usually Stay in Hospice

Most patients do not seek hospice care until their death is imminent.  However, a significant minority of patients survive six months or longer, with 12-15 per cent of study patients falling into this category. While predicting someone’s life expectancy is difficult because each case is different, patients under 65 were less likely to die within six months of registration.

Gender also appears to play a role, with men slightly more likely to die in six months, 88.4 per cent compared to 85.1 per cent for women. When patients with dementia or a stroke have a lower overall mortality rate than those with other conditions, the reason for hospice admission is also significant.

According to the report, the average stay time for hospice patients increased by 5% to 77.9 days in 2018 from 74.5 days in 2017. This is considered good news for patients because many people do not receive all of the benefits of hospice care. Many families expressed regret that their loved ones did not enter hospice sooner in surveys conducted by the United States Centers for Medicare and Medicaid Services.

Hospice eligibility is only valid for six months. This means that patients will not live more than six months after being admitted. However, if many patients survive after this time, they may be eligible for other hospice or discharge. Find out hospice near me while looking for hospice care.

How Long Does Hospice Keep Patients

When a patient’s condition improves, or his life expectancy exceeds six months, he or she loses eligibility for hospice care.

Aside from their condition deteriorating to the point where it is no longer terminal, a patient may be discharged from a hospice. A patient, for example, may withdraw from hospice care at any time and for any reason.

Furthermore, patients may move outside the hospice’s service area or be transferred to another hospice. A patient is rarely discharged due to disruptive, uncooperative, or abusive behaviour or the hospice’s ability to care for the patient effectively. Patients can appeal their hospice discharge. If a patient is discharged from hospice and their condition worsens, they may be readmitted.

What Are the Final Stages of Hospice

The following are indicators and suggestions for approaching the end of life:

What Happens When A Hospice Patient Stops Urinating

You will notice a gradual decrease in the patient’s urine output. If the patient uses a catheter, the urine may appear very dark. Bowel movements may stop entirely, or the patient may become incontinent in the final few days. When circulation is reduced, the kidneys and bowel function may suffer.

Oasis Hospice provides the best services along with hygienic food. However, these all are myths about hospice taking your assets because most people think that and refuse the best services. For information, contact us at (708) 564-4838.